It was bulls to the fore in the beef inter-breed championship at this year’s Royal Highland, with the Charolais winner triumphing over all the breeds on show.

Leading the way was AJR Farms’ Maerdy Morwr, a six-year-old son of Maerdy Dynamite. This big, powerful bull, from AJR Farms, Aberdeenshire, stood ahead of the Limousin champion, Pabo Procters, which finished up reserve overall for AW Jenkinson.

In the beef teams, it was the Limousin four that secured the champion ticket, with the Charolais team in reserve.

Overall in the dairy section, was the Ayrshire champion, Hilltower Modern Marcy, a fourth calver from the Lawrie family, with the Holstein, Logan Estate Jazz, taking reserve.

The Ayrshire also led the way in the junior inter-breed contest, with the Davidsons’ Halmyre Urr Louise, winning over the Lawries’ Red and White champion, Cuthill Towers Jackpot Bloom.

Below are pictures of the main cattle prizewinners. We have many, many more pictures in our Photo Sales gallery, take a look there to view and purchase any.

Highland champion, Gusgurlach of Balmoral, from The Queen’s Highland fold 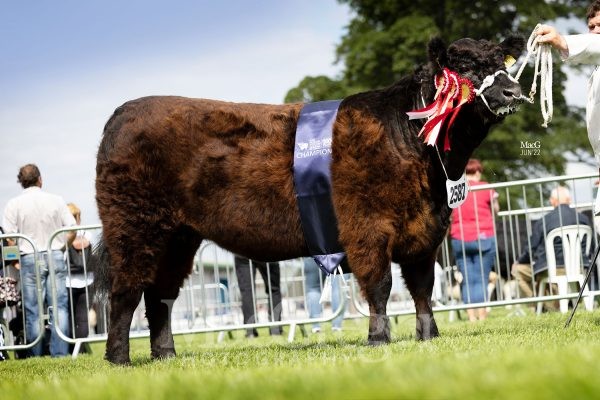 Galloway champion, Beauty 2431 of Romesbeoch, from the Ross family

The Charolais duo picked up the interbreed pairs championship

Any other breed champion, the Red and White, Whiteflat Jordy Lizzie Red, from Mungo Bryson

We have many, many more pictures in our Photo Sales gallery, take a look there to view and purchase any.